On the afternoon of Saturday, October 11, 2014 Empty Cages Los Angeles and Progress for Science joined forces for an eventful day of action in solidarity with SAEN’s 2014 Primate Liberation Week. The day began at LAX at the Tom Bradley International Terminal packed with holiday weekend traffic. All eyes were on the Air France ticket counter as over twenty activists bellowed chants from outside loud enough for the entire terminal to hear.

Passengers took pictures and videos of the activists and their signs while requesting literature detailing Air France’s bloody ties with the vivisection industry.  After roughly an hour of reminding Air France that they were the final commercial airliner willing to transport animals to labs and that they will be held accountable by the global Gateway to Hell network, activists convened for a group picture and headed off to hold another animal abuser accountable.

Activists regrouped in the neighborhood of UCLA vivisector, David Jentsch, to the usual squad of UCLA PD in attendance. As usual, a legal observer was present and constitutional rights were upheld. Activists lined the sidewalk across the street from Jentsch’s mansion behind an orange line marked specifically for anyone who dare vocally oppose Jentsch’s ways.

Hoping that their words could melt the ice in his cold and empty soul, activists chanted as loud as they possibly could to ensure Jentsch heard every word. A  couple of angry neighbors loudly objected to the noise though one agreed with our stance. One woman driving by was so moved she joined in on the demonstration and thanked us.  As the sun began to set the activists headed down the hill to regroup.

Placards of individual letters illuminated with lights reading “UCLA FREE THE MONKEYS” were distributed and activists marched back up the street to Jentsch’s house and stood silently in remembrance of the monkeys held captive and the ones whose lives had been stolen from them in the cold, cruel labs of UCLA.

Cars usually buzzing quickly up and down the street slowed to read the display, soaking in its meaning before passing on.  The group then silently marched down to Ventura Boulevard where onlookers slowed in their cars, some even getting out to take pictures of the artistic display of compassion. The group dispersed to their final action for the evening.

Reconvening at an exit off the 101 freeway, the placards were illuminated and distributed once again. The group headed up to the freeway overpass for all passersby to see “UCLA FREE THE MONKEYS” shining so clearly it could not be missed.

In solidarity with the primates locked up in lab cages: We see you, we care, we are sorry, we are trying.

On Sunday October 5, 2014 dozens of compassionate activists assembled at the beginning of the historical Seal Beach pier. The activists were ready for a day of education and outreach about the plan to trap and gas coyotes in Seal Beach. Many activists handed out leaflets and engaged in dialogue with Seal Beach citizens who were eager to learn about the issue and take action.

Other activists held signs and banners urging Seal Beach residents to speak out against the coyote cull. At the end of the day hundreds of leaflets had been handed out, thoughtful dialogue had taken place and new activists had been created. Thank you to everyone who came out and gave this issue visibility!

Please join us next Sunday for another effective day of educational outreach, event will be posted soon on our Facebook page https://www.facebook.com/emptycagesLA so stay tuned! 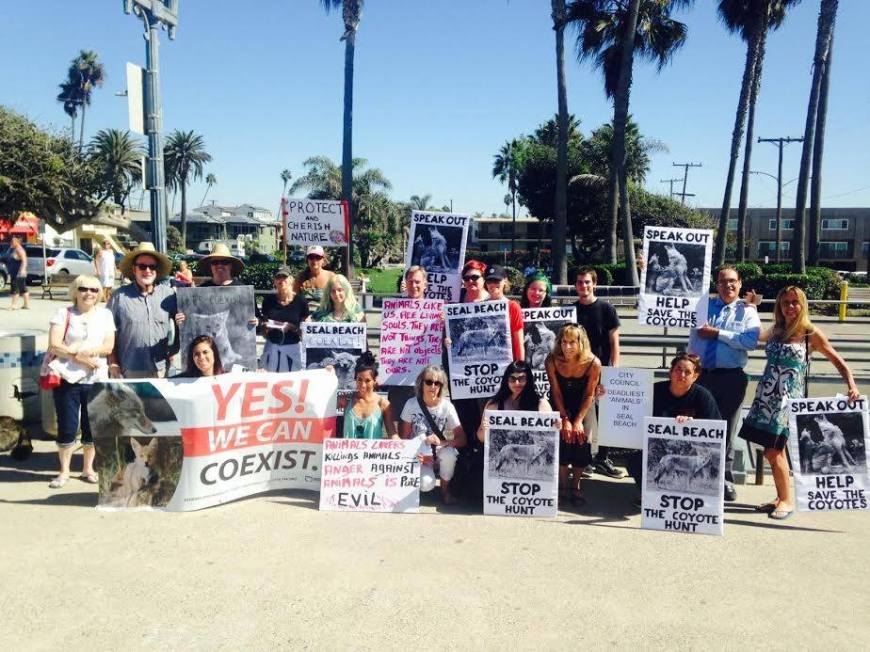 On the afternoon of Saturday August 30th, on an extremely busy Labor Day Weekend, twenty seven activists gathered at Los Angeles International Airport (LAX) to give Air France a piece of their mind. But this demonstration wasn’t only about Air France, it was also Day 10 of “Dear Monkeys, These Eleven Days of Action are for you” in solidarity with our good friends from Progress for Science and on behalf of the eleven monkeys known to be held hostage in testing labs at the University of California Los Angeles (UCLA).

Armed with megaphones, signs and leaflets the activists went to work letting the departing flyers, surrounding airlines and employees of the jam packed Tom Bradley International Terminal (TBIT) know exactly what Air France was up to. Activists loudly reminded Air France that they were the FINAL remaining commercial airliner willing to ship non-human primates, dogs and cats to animal testing facilities and that it was time to revamp their business model as all other commercial airliners have agreed to do. Demonstrators reiterated to Air France that the global Gateway to Hell Network of activists is watching and they are not going away and they are not backing down until Air France enacts a ban in writing.

The demonstration was a huge success! Leaflets quickly dissipated into the hands of the eager public demanding to know what they could do to help. Air France and UCLA your animal abusing days are numbered, the public is being exposed to the truth and your dirty secrets are impossible to hide.

Please join Progress for Science and Empty Cages Los Angeles as we join forces again for the next two weekends!

See you in the streets! 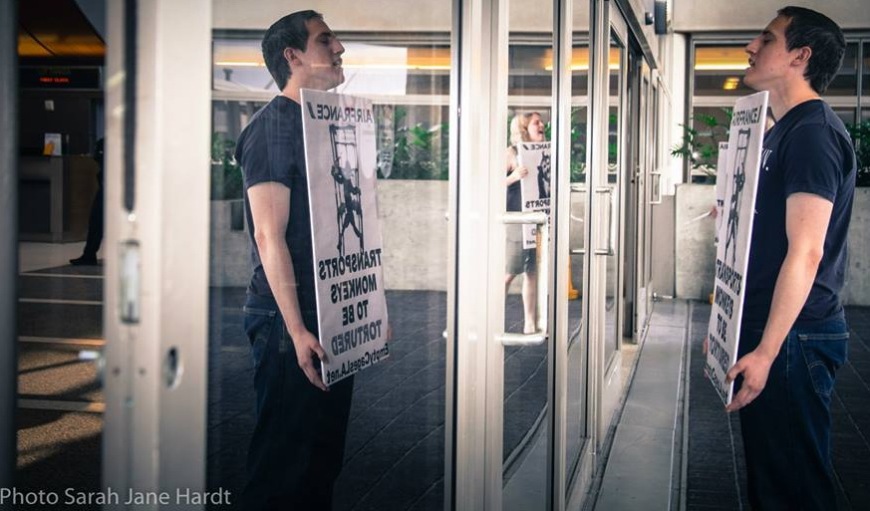 On the afternoon of Saturday, August 9th fifteen activists returned to Los Angeles International Airport (LAX) to remind Air France of the following:

“Air France, we are here today to let you know we will not sit passively sending letters, signing petitions and making phone calls. We are here to hold you accountable, accountable for your unethical, violent and inhumane business practices.

We are here to hold you accountable, for being the FINAL remaining commercial airliner willing to ship animals, such as non human primates, dogs and cats to animal testing labs across the globe where they will endure a life of perpetual pain, torture and death.

Did you know that 47 cents of every dollar of the National Institute of Health’s twelve-billion dollar annual budget goes towards animal experiments? So that universities, such as UCLA, can spend millions of tax payer dollars to addict the eleven known primates they hold hostage to substances such as nicotine, PCP and meth to prove they are addictive?! I think as a society we are fully aware that these substances are addictive. If you don’t already feel pain in your heart about this injustice, perhaps you feel pissed off that you are funding this money hungry industry, known as vivisection, without a say in the matter.

Please join us in ending this madness! Boycott Air France until they put into policy that they will no longer ship animals as cargo pieces beneath the feet of unsuspecting passengers to a life that we would not wish upon our worst enemies.” 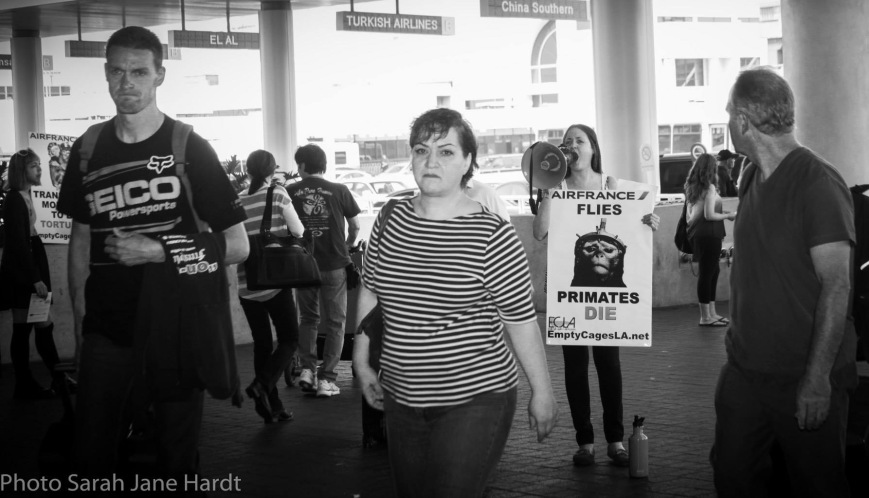 The message was understood loud and clear through loud vocal outreach, informative leaflets and heartbreaking signs informing the public about Air France’s involvement in animal abuse.

Air France, if you want some peace and rest cut your ties with animal tests!

This protest was also in support and solidarity with Kevin and Tyler and please don’t forget to join us for the Los Angeles demonstration during the National Weekend of Action Against the AETA.

Empty Cages Los Angeles will be returning August 30th to LAX with our good friends at Progress for Science on Day 10 of P4S Dear Monkey, 11 Days of Action for You and we could not be more excited to join forces in ending animal abuse!

Until ALL Are Free,

On the afternoon of Saturday, July 26th Empty Cages Los Angeles held a demonstration at Los Angeles International Airport against Delta Air Lines in solidarity with the ongoing Fight or Flight Tour organized by The Bunny Alliance, Resistance Ecology and Earth First! Journal. This date was chosen in conjunction with the next Fight or Flight Tour stop in Atlanta, Georgia home to Delta’s corporate headquarters. At Empty Cages Los Angeles we want to ensure the message of our outrage at their inaction is heard loud and clear from both the doors of their fancy corporate office and from across the United States at the second busiest airport, LAX.

Ten seasoned activist armed with four megaphones were a force to be reckoned with as they used their voices on behalf of the million silenced lab animals suffering lives of nothing but isolation, torture and eventually death. They explained to Delta employees the power Delta has to sway their strategic business partner, Air France, to enact a ban on lab animal transport and that Delta will be held accountable for their apathy and indifference. Delta was also made aware that activists across the United States are embarking on a national campaign against them that won’t end until Air France enacts a ban. Activists also shared literature with hundreds of interested passengers and let them know not to fly Delta and to contact corporate and tell them exactly why:  “I will not fly Delta until Air France enacts a ban on lab animal transport”.

This action was also in solidarity with local Los Angeles activists, Tyler Lang and Kevin Oliff, who were recently indicted under the Animal Enterprise Terrorism Act. Please donate through their support site as this case sets precedent for the future of our movement. Differences aside, it is times like these when we need to stick together.

Until ALL Are Free,

On Wednesday December 18th a San Diego activist had their house raided by the FBI, Joint Terrorism Task Force and local law enforcement. It is unclear exactly why this individual was targeted but based on the statement made on Facebook … END_OF_DOCUMENT_TOKEN_TO_BE_REPLACED

Empty Cages LA held a demonstration against Delta Airlines at LAX the night before Thanksgiving, the busiest traveling day of the year.  ECLA is putting pressure on Delta Airlines because of their strategic business partnership with Air France, one of … END_OF_DOCUMENT_TOKEN_TO_BE_REPLACED